Breakflute is a digital musical instrument I developed as part of my Master’s thesis.

The physical interface is similar to a open tone hole flute (like a recorder), with vibration actuators inside the mouthpiece and tone holes. The interface controls a specialized digital synthesizer that provides both sound and vibration feedback. These two high resolution feedback channels, simultaneously active and tightly correlated, provide the performer with a richer source of information for self-monitoring than sound feedback alone (O’Modhrain, 2000). A flute design has been chosen because open tone hole flute players are in the unique position of having their lips and fingertips – the regions of the body most sensitive to vibration – in direct contact with the vibrating air column that radiates sound.

Much like a flute, the Breakflute is played by blowing into it and covering the tone holes. However, the software synthesizer was designed for triggering and rearranging breakbeat patterns. Components of rhythm such as phrase, accent, and measure subdivision are represented as tactile stimulation events (TSEs) (Rovan, 2000). The vibration synthesizer process the musical signal for the vibrotactile channel, detecting perceptual musical variables such as brightness, noisiness, and spectral centroid, and encode them as vibrations.

This work is an extension of the Touch Flute, which was a proof-of-concept prototype for a vibrotactile wind controller.

The Touch Flute was constructed to facilitate experiments to determine the usefulness of vibration information to wind performers. It provides a gestural control interface, and both audio and vibration output. The ability to arbitrarily control the frequency and amplitude of the instrument’s vibrations allows for empirical testing of musicians’ reaction to variability in the parameters of vibrotactile feedback as compared to auditory feedback. The effect of unexpected or impossible vibration parameters, such as inverting the frequency response, could also be observed. 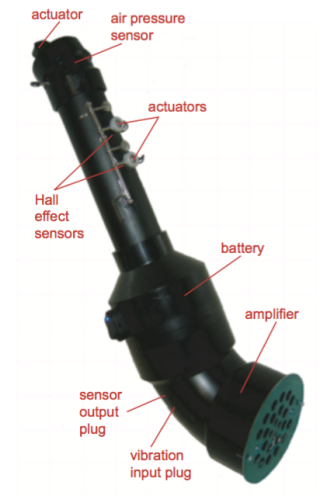 In the experiments that were conducted with the Touch Flute, users reported an improved feeling of “warmth” or “familiarity” with the instrument when vibrations were present, indicating players of traditional woodwind instruments might prefer vibration feedback in wind controllers for increased realism.

For more details on these interfaces, you can read my thesis.

This site uses Akismet to reduce spam. Learn how your comment data is processed.