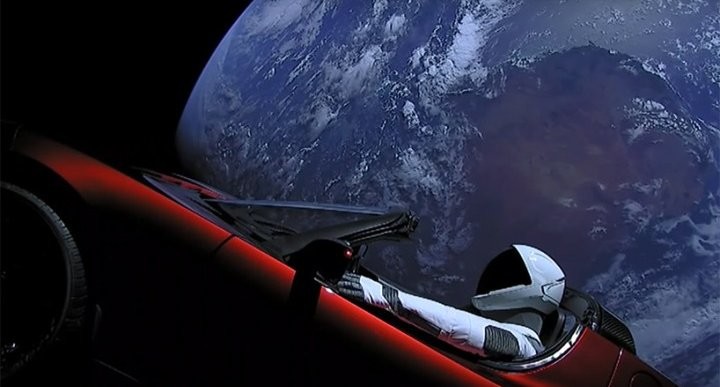 Cross-posted from LinkedIn. All images © SpaceX

A lot of people are talking about how the Falcon Heavy is going to open up new frontiers in space, since it can lift robots, building materials, scientific instruments, and even habitats at low cost. The Falcon Heavy’s successor, the Big, uh, “Falcon” Rocket, may even let us colonize deep space and Mars. Exciting, for sure. But I want to talk about something different. I want to talk about Starman.

Starman is a 1984 romantic science fiction film starring Jeff Bridges and directed by John Carpenter. It’s also the name of the mannequin sitting in a Tesla Roadster that the Falcon Heavy placed in solar orbit on Tuesday. The Roadster’s purpose during launch was to stand in for a real payload of the kind SpaceX customers are expected to lift with the Heavy system. But I believe Starman is much more than that – I think he’s the most important breakthrough in space travel since Apollo.

How could that be? Why would a mannequin pointlessly revolving around the sun be more important than the Space Shuttle program, or the International Space Station? Because Starman has tipped us into a new era of space exploration. Before Starman, space was serious business. Today, space can be approached with a sense of humor and a spirit of improvisation.

Media reported that the Roadster was a test payload, used because no customers wanted to take the risk of launching an expensive satellite on an untested launch system. That’s true, as far as it goes, but think about the extra trouble it took to mount a sports car inside the rocket so that it would have a low likelihood of compromising the mission. Could you imagine the headlines if the first Falcon Heavy mission seemed to be going well, until something unexpected happened with the Roadster, and then everything fell apart? Elon Musk would have been criticized for a hare-brained idea that cost ungodly amounts of money. (Maybe the car is just similar enough to a satellite or probe that seeing it survive the launch will convince customers that SpaceX has what it takes to keep their payloads safe. But if that was the goal, there were other ways of achieving that while maintaining a closer resemblance to a real payload.)

The key to understanding Starman is that he’s pointless – and at the same time, deeply meaningful. He’s pointless because there’s no reason to go through the effort and risk to launch a car into solar orbit aside from wanting to be funny and create viral content. It’s frankly still astonishing to me that it even happened.

Starman signifies that space is now a place where we can make jokes and pull pranks. Having a sense of humor is a sign of confidence, and pulling an expensive prank signals an excess of resources.

The center console in the car, which permanently displays the words “DON’T PANIC!” has several meanings, as far as I can tell. First, it’s a funny cultural reference. Second, seeing it from the perspective of the dummy in the driver’s seat makes you think about how it would feel to float through space in a sports car for a billion years while staring at those words, which is hilarious. But most importantly, it’s a message to us still trapped on Earth. Don’t panic – our destiny to become a spacefaring civilization is finally around the corner.